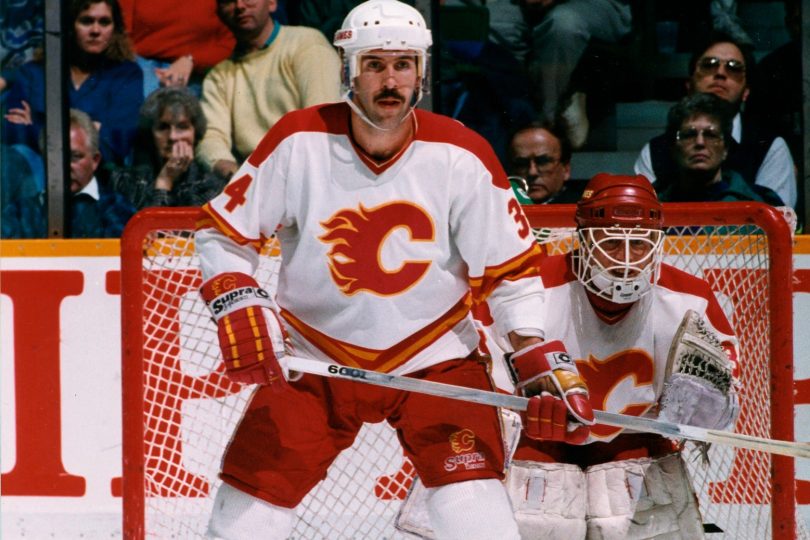 This is the time of year that sports tends to dominate.

The Grey Cup is just around the corner. The National Hockey League is in full swing as is the National Basketball Association as well as all sorts of university and high school sports including community leagues and minor sports of all kinds.

Quite simply, sports can overtake our lives right about now.

The interesting thing about sports is how they shape a person’s personality and future success in the careers they choose to embark on in their lives – careers such as those in the real estate industry.

Jamie Macoun, who was a star defenceman with the Calgary Flames, Toronto Maple Leafs and Detroit Red Wings and a member of the Flames Stanley Cup winning team in 1989, said his hockey career has been a good foundation for his career as a realtor with RE/MAX Real Estate (Central).

“I think the number one thing that any realtor will soon find out once they’ve joined the business is that there can be a lot of disappointment. You can do everything right and you still don’t get the clients. Or the house doesn’t sell. Something can go wrong. And the idea is you’ve got to dust yourself off and go forward,” said Macoun, who is in his third year with Central.

“A lot of things are out of your control. You don’t control the market and if you’ve got a couple of nice houses listed and the market suddenly changes well you’ve got to go back in and tell your clients that we might have to make an adjustment. In some cases, it’s a bit of a confidence thing. You don’t want to rock the boat. But having played hockey for quite awhile and having to do a bunch of things and get analyzed or maybe over-analyzed by 16,000 people on a night then you build a bit of a skin and you understand very quickly you can only control what you can control.”

Macoun said that whether it’s hockey, or any other sport, almost everybody who excels in anything that they do understands the amount of hard work that goes into that success.

“I think that may be the biggest misconception of the public. Everybody thinks they can be a realtor but if that’s the case why is there a thousand realtors a year quitting? Because it’s tougher than it looks.”

Doug Zerr, a realtor at Central for 29 years, played as a defensive end with the junior Regina Rams, then played with Bemidji State University in Minnesota and was in a couple of exhibition games with the Toronto Argonauts of the Canadian Football League.

What did he learn from his football background that has helped him in his career as a realtor?

“I think they’re probably qualities that would be for anybody whether it’s business or whatever. Confidence. Perseverance. You can have adversity but you have to hang in, suck it up and keep going. So dedication. Probably some humility as well if your team is getting their asses kicked, which happens, it puts you back in your place but it also teaches you to suck it up and keep moving forward,” said Zerr.

“They’re good qualities for anybody to learn. I would say trust as well because you’ve got to trust your teammates that they’re doing their jobs and that it’s not always about you. It’s the team. There’s no ‘i’ in team as they always say. Also attention to detail because as you move up in the levels there’s more details involved. Teamwork obviously.”

Sally Krulis, who has been a realtor with Central for close to 21 years, has had extensive experience in competitive soccer in Calgary over the years.

The competitive nature of sports has taught her many things that have translated into her career as a realtor.

“Having the drive and the motivation and the commitment and the hustle and the mindset,” she said.

“There’s also the importance of coaching. Realizing the value of having a coach in both sports and in business. You need that extra perspective. Sometimes the kick in the butt. You’re always learning, growing, improving. And coaching really helps that. With everything. Business and sports.”

David Lem, Associate Broker/Manager with Central, is a 35-year veteran basketball referee who continues to officiate at the high school, collegiate, and university levels on a provincial and national basis.

Lem said that sports helps build character and there are lessons learned in sport that can contribute to success in business and in life.

Among the many lessons learned, Lem said there are three attributes that successful real estate careers are synonymous with top-performing athletes.

“You must work on the fundamentals – do the little things well. Just as a basketball player needs to master the core basics such as shooting, dribbling, running, defending, and so on, a realtor needs to perfect the art of pricing, dealing with people, time management, and negotiating among others,” said Lem.

“Then you need to be able to thrive under pressure – be able to focus and learn to be comfortable being uncomfortable.  One thing is to perform in practice or when you’re not under duress but how does one perform and conduct themselves when dealing with situations in the heat of the moment?

“Finally, you need to work harder than the competition. Many of the best athletes regardless of the sport are the hardest-working members of their respective team. They don’t make excuses or point fingers when something goes wrong or when they lose. In the real estate business, it’s easy to blame the market, the economy, the customer, etc. when things go awry.  The best producers learn from every situation (win or lose) and work harder to make things happen.”