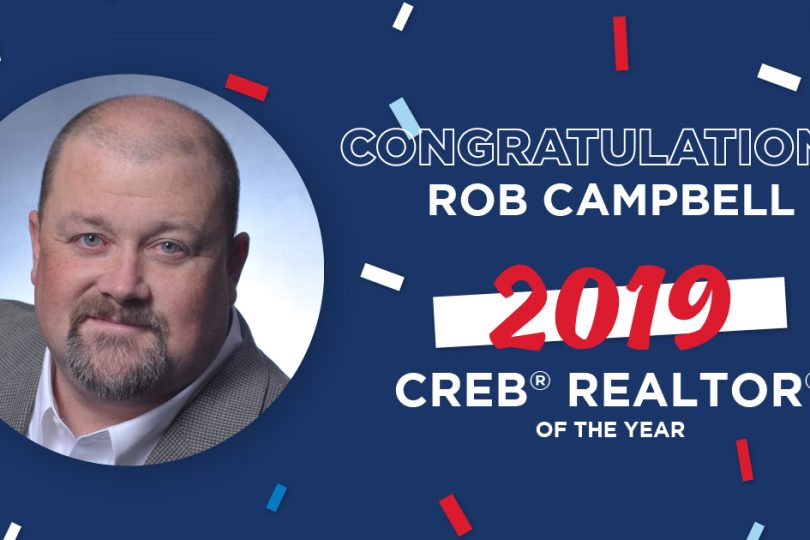 Giving back to the community is in realtor Rob Campbell’s blood – part of his DNA you could say.

Campbell, a realtor with RE/MAX Real Estate (Central), is this year’s recipient of the REALTOR® of the Year – T.W.H. (Bill) Saunders Memorial Award – the most prestigious award that a Calgary Real Estate Board realtor can receive.

To even be considered, a realtor must be nominated by a colleague, and then vetted by a committee of their peers. Nominees must be involved in CREB committees and actively contribute to life in the greater community through volunteerism and charity.

“In our industry, it’s an incredible honor to receive the TWH Saunders Award. To be put on that list, with all of the past recipients. . . . it is very humbling,” says Campbell.

“The reason that you get involved, at least for me and so many others that volunteer at CREB, is not for the accolades, the pat on the back or the ‘you’re so great’ . . . that’s not why we do it. We do it because we get to work with peers who are all of the same mindset. It allows me to give back to an industry and an organization that has given me a wonderful life . . . that has given me a career.”

Campbell, who has been a realtor for 15 years, learned those qualities at an early age by watching his parents.

“Both of my parents became volunteers with the Calgary Stampede when we moved here from Montreal in 1977. A couple of years ago, my dad was presented with the Stampede Board’s President’s Coin, for his dedication to that organization. He has given his time and passion to the Calgary Stampede for 40 some odd years. I grew up in that world, in the mindset that our community is what we make it. It’s not about money. If you have the money and can be philanthropic, fantastic. One thing we all have is time and you can be generous with your time, so go do it. You’ve got to give back in some way. That’s kind of the mentality that I was raised with watching my parents, that’s where it all started I guess.”

The Calgary Real Estate Board says recipients of this award are true professionals who exemplify caring and humanity for the communities they work in. Thomas William Henry Saunders (1903 -1977), known to all as simply “Bill”, was an outstanding realtor who inspired many with his professional excellence and contributions to the community. After his passing, the CREB Board of Directors created an award in his memory to continue inspiring real estate professionals to be the best they could be, and to recognize those realtors who were giving back to both the industry and the greater community.

RE/MAX Central has had four other agents or former agents that are recipients the award: Jon Dick 2015, Nick Profeta 2012, Vern Tetz 2006 and Alan Tennant 1995. Dick and Profeta remain with the company, Tetz has retired and Tennant is CEO of CREB.

Campbell’s community works include being a Founder with Business Fore Calgary Kids and he also sits on the board with Calgary Rocky Mountain Little League.

As a realtor, Campbell is involved in both Residential & Commercial real estate, as well as being a Business Broker with a focus in Hospitality operations.

The food and beverage industry has been in his blood for more than three decades.

And he’s turned that passion into roles as a partner of the award-winning Cotto Italian Comfort Food restaurant in the trendy Kensington neighbourhood, as well as being one of the city’s premier realtors specializing in Hospitality, an industry he loves and knows so well.

“For me, when I’m selling restaurants and I’m walking into places as a real estate agent, I look at the venue through a set of eyes that not very many real estate agents can,” he says. “There are other guys that do what I do, but they’ve never worked in the industry the way that I have. They’ve never been behind the bar at three o’clock in the morning. They’ve never had to deal with the stuff that I’ve dealt with over a 30-year career.”

Campbell was born in Montreal and raised in Calgary. His introduction to the restaurant industry began when he was 19-20 years old and he became a DJ when Denny Andrews American Bar opened on Macleod Trail. At the time, he was working for an oil company in the mail room and decided “I am going to go and do this nightclub thing.”

After about a year of working there, he was headhunted by Edmonton Oilers’ star hockey players Wayne Gretzky and Kevin Lowe and their group to go work for them at a bar they were starting up. Campbell worked in Edmonton for three years and worked as a DJ in almost all the major bars there.

Looking to take a break, Campbell spent a year on the road, travelling throughout Australia. “It was a fun time for a guy in his 20’s,” Campbell admits. “I think the most important thing you can do for your kids after they graduate . . . is help them get a passport.”

When he returned to Canada, Campbell moved to Vancouver to escape the Edmonton winters, and was going to be a Valet at a nightclub. He ended up filling in as a DJ one night and was promptly given the Head DJ and Entertainment Director position at the legendary Richard’s on Richards, where he stayed for four years. Over a 13-year run in Vancouver, he left the DJ booth to take on management consulting contracts all over the Lower Mainland, in nightclubs, restaurants and hotels.

He took on places that were under-performing or having operational troubles. “I would go in and re-staff them, re-market them, re-systemize them and bring them back to profitability, then on to the next contract,” says Campbell.

He moved back to Calgary in 2003, at which time he became an area manager for the Lammle’s Western Wear chain and about 15 years ago, he got his real estate licence.

“I did residential for about a year while I was trying to figure out the commercial side of real estate,” he says. “Once I got the commercial side down and knew exactly what I was doing, I just started selling restaurants. I missed the restaurant business, it’s in your blood, it’s really hard to escape. Anybody who’s ever been in the business, who’s ever worked in it for any period of time, knows it’s like the scene from Godfather III. Pacino says when he’s trying to take the family legit ‘just when I think I’m out . . . they pull me back in’. That’s what the restaurant business is for me.

“Real estate was a way for me to take an old career, a lot of old skill sets, a lot of old knowledge and move it into a new career and turn that into something successful.”

He now lives in South Calgary with the love of his life, Dana, and their two teenage kids, Cole and Jesse. As he reflects on this award, Campbell says: “Life doesn’t get much better than this, Calgary is an incredible city and a wonderful place to raise a family. I have lived all over Canada but Calgary will always be home.”