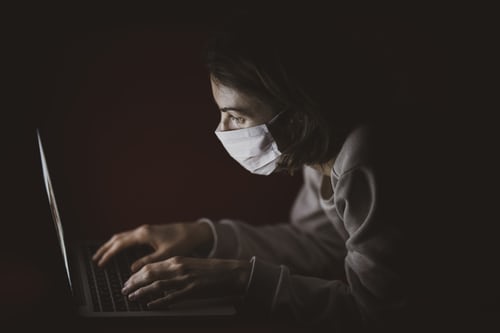 On Friday March 27, the COVID-19 (coronavirus) became more than just numbers for me.

I was informed that afternoon that I had tested positive for the coronavirus.

Naturally my first response was one of shock when my doctor informed me of the news. Then came feelings of sadness, anger and of course fear and worry about what the future would hold.

I’m used to reporting the news – for the past 40 years – and not comfortable when I become part of the news as I have now. Every day I report the most recent updated numbers given out by Alberta Health Services. Just numbers. Until Friday March 27 when I became part of those statistical entries.

Here’s the story of my journey in the hope that it will help people and inform people through this horrid crisis.

The number one question people ask and want to know is where did I get the coronavirus? I suspect it was during travel to Montreal in mid-March – on the plane and around many people, especially navigating its heavily populated Metro system each day. Quebec has since become a hotbed of cases with almost half the total number of people who have tested positive in Canada.

I developed a cough in Montreal but thought nothing of it. Just a regular cold you get at this time of the year. But when I returned to Calgary it got worse. Then I had three straight days of fevers as I would wake up in the middle of the night completely drenched in sweat.

I did the self-assessment online with Alberta Health Services and while it showed some symptoms, it didn’t show enough to see if I could get tested. The recommendation was to self isolate for a number of days. But my family was concerned and thought it could be more. I tried to call 811 but that was impossible to get through. So on the morning of Monday, March 23 I reached out to my doctor’s office.

After hearing my symptoms, my doctor said I should get tested because of my age and the nasty cough that just wouldn’t go away. So he put me on a list with AHS to get tested. By Wednesday, I still had not heard and my doctor decided to do the test at his office. What happened next was like a scene from an apocalyptic movie.

I drove to the doctor’s office back alley and the clinic’s back door. I was told to stay in my car. He came out completely protected from head to toe – a long medical gown, a mask and a plastic shield covering his entire face. A swab was taken which was unpleasant as it was shoved deep into the nostril. And it was over in seconds.

My results came back positive on Friday afternoon last week. Today, the fever has gone but the cough persists. And I have been quarantined in my bedroom for days. Otherwise, physically I feel good although some days I feel very tired and exhausted.

I am not taking any medication. Just like the common flu I’m resting and drinking plenty of liquids to flush this virus out of my system. The concern from the medical community is if I develop breathing problems because that would necessitate an immediate trip to the hospital. So I’m riding it out and hoping this will be gone in a few days. It’s been close to two weeks now that I’ve been dealing with it.

I’ve learned a lot through this experience. First and foremost, this is real and should not be taken lightly. This is very serious. That hit home for me one day when I heard news that a 61-year-old country singer had died from it and a 54-year-old news reporter in the U.S. Both younger than me. And there have been reports of even younger people who have succumbed to the dreaded virus.

I have learned how important it is to remain positive and take care of yourself physically and mentally. Those are important qualities to have when you’re fighting something like this that attacks the immune system.

I have learned what a wonderful support network I have starting with my family – wife Marlene and children Anna, Giulia and Aurelio – who have gone to great lengths to help me. Although I can’t interact with them as I am quarantined in my room, knowing they are there for me physically and emotionally brings me great comfort. But I am lonesome for them. Also, I have an army of prayer warriors and supporters giving me moral support through these challenging times.

I know that because of all that support there will be light at the end of this tunnel for me and I am extremely grateful for that.

I urge everyone to be safe out there. Practice all the social distancing and safety protocols that have been developed to help contain the spread of this vicious disease. And monitor your symptoms. Take the AHS assessment tool if you think you have some of the symptoms. Don’t brush off a persistent cough as the common cold at this time of the year. In these times especially it is better to be safe than sorry.