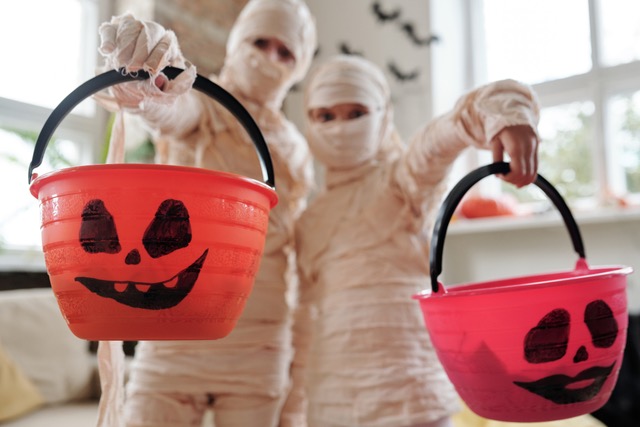 The COVID-19 pandemic has thrown a curveball at people over the last few months turning everything upside down in their lives.

The things we have been accustomed to doing have changed – some of those things have actually gone by the wayside.

However, Halloween, which takes place on Saturday, is one of those key traditions that people are hanging onto – a time to celebrate life, to have some fun and maybe just a time to forget about all the trouble brought on by the pandemic.

Lord knows we need that these days, especially children.

For Victoria Dalgleish, a realtor in the RE/MAX Real Estate (Central) office in Calgary, Halloween will be a time for her children Jack, 8, and Ava, 5, to get back to some normalcy.

“We bought tickets for Ghouls’ Night Out at Heritage Park. So we’re going to do that this year, hoping to see a little bit more normalcy going that direction,” she said. “We’re also going to trick or treat a little bit afterwards (in their neighbourhood).”

The family home will also still be handing out candy with grandma taking care of that aspect of Halloween. The home has been decorated with some skeletons playing the banjo outside with a bunch of pumpkins as well.

“I honestly don’t see a huge risk in them trick or treating. They often are wearing gloves and they’re bundled up and they’ve got masks on already and they’re quite distant for the most part in general,” said Dalgleish.

“But I just think that carrying on and having life kind of just being normal for them is important for their mental health and they look forward to these things all year long. I just don’t think it’s okay to take it away from them.

“I think this (COVID) is affecting them in ways that we don’t necessarily notice or see or they can’t really recognize what they’re feeling because it’s just such a foreign way to live. I mean if they can go to school and they can go to daycare, I think they should be able to trick or treat, celebrate and have some fun.”

John Malick, another realtor in the Central office, said his children – eight-year-old Abigail and four-year-old Harper – are looking forward to Halloween this year.

“We have two cohort families that are planning to get together – less than 15 people – taking the kids out trick or treating like usual. Abby is a huge Halloween fan. She likes it more than Christmas,” said Malick, adding that zombies and skeletons are part of the home decoration.

“This is somewhat a return to normalcy. I really noticed with my daughter when she went back to school usually there’s a little bit of tears and a little bit of nervousness but this year it was like ‘okay see you later’ and she was off. So I think some normalcy will help everybody. If I can go to Starbucks and get coffee, I’m sure my kids can collect candy.”

Over the past couple of years, the Central office has been decorated for Halloween and a jar of candy was awarded to the person who had the best guess on how many pieces it contained. There was also trick or treating  around the office as all of the managers and staff had treats to give out to everyone. And management, staff and agents dressed up with a prize for the best costume. There was also a pumpkin carving contest on display in the lobby and everyone who visited the office could vote for the one they thought was best. This was also shared on Facebook.

Like everywhere else, COVID-19 has forced some changes on how people traditionally celebrate Halloween. This year, the Central office is not having trick or treat or the costume contest. But the candy and pumpkin carving contest traditions will continue – just virtually. Everyone is welcome to cast their vote for their favourite pumpkins via Central’s office Facebook page.

For the Central office and for children and families, Halloween may look a little different this year but the tradition lives on and is a particularly important event this year considering what we’ve all gone through.