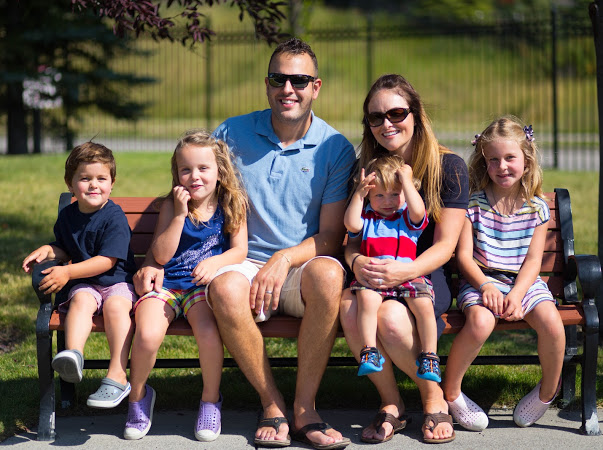 With Family Day set for Monday February 17, there’s no doubt real estate will end up being a topic of discussion for many people in the RE/MAX Real Estate (Central) family as they gather on that day.

For many on the Central team, the real estate industry has been part of their family lives – part of their blood you could say – for many years.

Here’s a look at some of those family connections that are part of the Central team.

Vanessa has some interesting family connections when it comes to real estate. Her uncle, her father’s brother, is Pat Hare, owner of Central.

Her husband Eric Drinkwater is also a realtor out of Central.

Vanessa started as a realtor with Joel Semmens at the end of 2005. “Pat had teamed me up with Joel.”

“Pat had a huge impact on me. He was the one that kind of encouraged me to go into real estate. He had told me that an agent was looking to partner up with somebody that could help with more of the office work and be more of a mentor for somebody new starting. So Pat had given me that connection with Joel,” she says.

Having real estate in the family has been beneficial for Vanessa, helping to create a larger business plan and the sphere of influence is huge.

“Eric and I are not related but it’s a very tight family connection,” says Vanessa.

Sano has been a realtor for 35 years. Sons Mike and Dan have been part of the Stante team for about 10 years now.

“I built a lot of homes and was working on the McDougall school, McDougall Centre, as a lead carpenter down there. And I went kitty corner across the street to the real estate board and thought I would just get my licence. I knew so much about housing and houses and construction. I thought it would be a good fit for me,” says Sano.

The real estate industry has been in the family blood.

Sano says being a family affair in business is a bonus when dealing with other families who are either buying or selling property.

“They know we have their interests at heart and it feels more comfortable for our clients having my sons carry on because they know they have the same ethics, work, attitude and work ethic,” he says. “We kind of have a family code of conduct in how we conduct ourselves and it’s pretty consistent. All three of us act in the same manner. It’s almost unspoken. It’s just how we do business.”

Joel has been a realtor for 26 years and Jennifer has been one for 17 years.

“We’ve worked together for the past 16 years,” says Joel. “We actually met at the office. She was a realtor at Royal LePage for a brief time 17 years ago and then she moved to RE/MAX Central. (Owner) Pat (Hare) was touring her around the offices and her office was across the hall from mine. That’s where we met and the rest is history.”

While there are some challenges in being a husband and wife team, Joel says there are many positives to that real estate relationship especially in the couple’s lifestyle and raising a young family.

“You can really stickhandle your time in terms of spending time with the kids and also with travel and vacation time. If you want to take extra time off you can do it because you’re working together. That would be the bonus with it,” says Joel.

“The negative with it is it can be tough because you’re always talking about work and with real estate we’re kind of like owls – working at night, working on weekends, working all the time.”

Because they’re both in the industry, they realize the time and commitment involved and they have mutual respect for what each of them are doing.

On Family Day, the family will likely take the Sunday off and spend it together as it does most Sundays.

All three in the Ramage family work out of the Central office with Lucas and Greg working as a team and Trevor working as an individual.

The tie to the real estate industry actually goes back with grandfather Eric who was a realtor.

“Back in 1972 he opened Ramage Realty with my dad. They ran that for many years – a little boutique brokerage down in Kensington and there were a couple of different iterations of that. But it was in the 80s that my dad went to RE/MAX Central,” says Lucas.

Real estate definitely has been in the family blood.

“It sure has,” says Lucas. “It’s been all around me all my life.

“My dad’s motto is really simple. It’s do what’s right in terms of respecting the golden rule of people. Along with that you have your name. In this business you do the right thing and you get a good reputation for being a good business person. Trustworthy, reliable. And you’re always going to have your name to stand on. It’s funny nowadays it’s all trendy you are your brand. That’s how we’ve been raised. At the end of the day it’s the name that kind of opens the doors of opportunity for us.”

In the community it’s known that the Ramage’s sell houses. When Lucas was in school, he was asked if he was going to be a realtor.