Calgary’s real estate market has experienced its share of cycles in the past two decades.

Ups and downs. Booms and busts.

But despite all the volatility, one thing has remained constant – the high level of performance and achievement consistently delivered by RE/MAX Real Estate (Central).

Just recently it was awarded as the top producing single RE/MAX office in the world in 2018 – for the 20th consecutive year. The Calgary office picked up the award at the annual RE/MAX R4 Convention in Las Vegas.

The honour was reached once again despite a market in Calgary that continues to be sluggish.

“With the way the Calgary market has been, we’re down from the year before. Our transaction count was down. We were surprised we won it last year for 2017 and to win it again this year for 2018 it’s truly a shock,” says Nick Profeta, Chief Happiness Officer, Manager and Agent with Central.

“We’ve always had a get it done kind of attitude. When I started 26-27 years ago, I was joking with somebody that there were no posters on the wall that said Success. Nobody mentioned culture. We just kind of came here, we got along, we worked hard, we got the job done. It grew from there. That vibe, that feel, that sense of work still exists even in a difficult market with all the negativity and the cloud that’s been over Alberta and Calgary. We still got the deals done.

“We just try to make sure everybody keeps positive, goes to work and tries to help the people that want to buy or sell.” 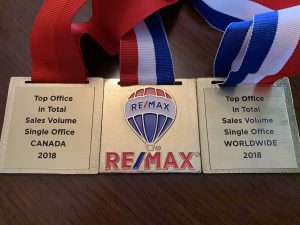 Central is owned by Pat Hare with his wife Denise. He co-founded Central in 1984 with only 40 agents before growing the office to over 280 agents today.

“Our support staff is incredible. We’ve had realtors who have been here for years and years and years and they’re not afraid to share, to mentor, to help out the newer agents,” says Profeta. “We’ve kept up to date with technology. Last year we built a new training centre with a media room. We also added a little bit of social media and a media component just to share our story.”

It has also won the largest single office in the world and in Canada for 20 consecutive years.